One of the many things that was affected by the pandemic was volunteerism.  Both in terms of my ability and others to to volunteer “among the people “ and in terms of the people getting the help they needed.

I’m aware that many of my fellow retirees have moved past volunteerism, or have never volunteered, or think retirees should not have to include volunteering in their retirement lifestyle. I come from the perspective that volunteers are almost always needed in almost every place, and my faith fosters a sense of this, so as I say it was one of the many things I missed, and missed doing.

Some readers will remember that in the Before Times, my church hosted homeless families for a week at a time in the church. Feeding them, supporting them, helping them with child care, transporting and so on in a family friendly environment with no judgment. That obviously ended in early 2020 although that church has recently started said ministry up again.

I am, and have been, ready for another challenge. I am now mainly out in the world among the people, living my life mainly normally and trying to avoid large crowds indoors especially.  I have missed person to person volunteering (as opposed to working in an office or shelving books or making things for others which I still do often). And so, I have tried to find such an opportunity that works within my limitations.

I am probably healthier than at the beginning of the pandemic. But I have degenerative disease in my legs that’s not going away. While I can stand, sit and walk, I cannot walk quickly-and I cannot stand in one place. So standing and cooking in the kitchen with the residents and then serving them is out. But other things are in. Lots of other things.

I’m currently focused on three choices. One is a much larger commitment than the other three, and my family has encouraged me to reconsider this. Volunteering for CASA as a court advocate for a kid in the system would require a minimum of 15 hours a week which doesn’t sound like much, but I would be committed to the child and reschedules and such would be difficult. It is the option calling to me the most, and I intend to go to an orientation at least and see if this is where I am led.

The second option would be the primary homeless shelter, where there are multiple volunteer options and you can sign up for shifts by the month or less. The needs involve intake, children’s programming (raising hand) and things as mundane as laundry and helping to serve dinner.

My last option is a shelter for abused women and children, and would involve both volunteering and acting as an active and participatory board member.

My role after training would be as a companion when my victim is taken to or goes to the hospital.

In the before times (both in terms of covid and age), I would have chosen at least two of these options.

But aging happens bit by bit, especially with chronic disease. I have become more of a homebody and made an even deeper dive into my creative life, which I will share more of later in written and picture form. I have simply come to enjoy the staying at home time. And I want to be free to travel and explore, day by day or for a week, without leaving people in the proverbial lurch.

Next week, I’m touring all the places and doing all the orientations and then we’ll see where I end up. I think I know, but I want to make sure before I decide.

Until frugal Friday, enjoy a picture of someone else’s creativity. My daughter is now full on into jewelry and painting! 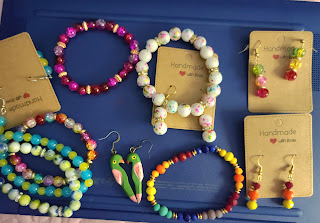